Differences between M4A and MP3

M4A and MP3 are two of the most widely used audio formats. Not sure which one to use? Here we explain the differences between M4A and MP3. In addition, we will introduce a converter which can convert Apple Music songs and M4A music to MP3 files.

Advantages and Disadvantages of M4A Format and MP3 Format

Which should be used, M4A format or MP3 format? What is the difference between M4A format and MP3 format? There are many questions like this. Before finding the answer, first take a look at some tips on both formats.

M4A format (* .m4a) is an audio file that does not support video and contains only audio. The M4A format is not an official MPEG-4 file, but an extension decided by Apple Inc. The music formats sold in the iTunes Store use the M4A format, which allows Apple users to purchase and download unprotected music from the iTunes Store. M4A format music is generally encoded using irreversible AAC compression, but in some situations M4A format is also used for Apple ALAC Lossless. 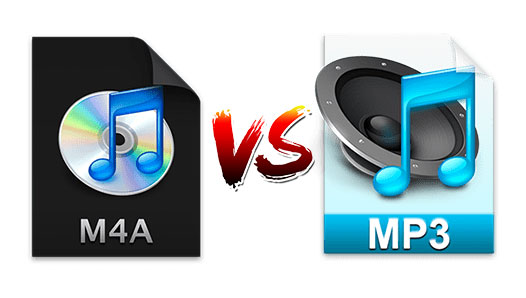 The MP3 format is widely recognized as the most popular and versatile audio format on the market today. Why? Like M4A, MP3 is a file format that only supports downloading and playing audio music. MP3 was introduced in the industry long time before the M4A format. Therefore, it is sometimes said that M4A is an underdeveloped version. The MP3 format uses a compression algorithm that reduces the size of the file. It can be played in MP3 format on most devices, so you can easily save and share it.

From the above information, you can see that M4A format and MP3 format have a lot in common. For example, both are designed for downloadable music formats and not for other types of digital content. It also uses a compression algorithm, which affects the size and sound quality of the music. Regardless of these two common attributes, they have some differences that distinguish them from each other. So what's the difference between MP3 and M4A? Simply put, the differences between MP3 format and M4A format are mainly in sound quality and compatibility.

The next differentiator is compatibility. Music format compatibility is simply whether it can be played on a device or used in software. As mentioned at the beginning, M4A is a limited audio format. As a result, some devices, such as older MP3 players, cannot play M4A format. Even the popular video editing app called Vivavideo cannot support M4A. On the other hand, the MP3 format, despite the introduction of M4A, can also explain its high compatibility, which is also the most popular in the industry. When using M4A on devices, software or apps, you need to check if it is compatible with M4A format. If you don't want to check, it's safe to use MP3 format.

Music purchased from the iTunes Store is in unprotected M4A format. Music downloaded from your Apple Music subscription with iTunes or Music app is in protected M4P format. It's easy to convert between M4A format and MP3 format, but you need TuneKeep Audio Converter to convert M4P format to MP3 format. 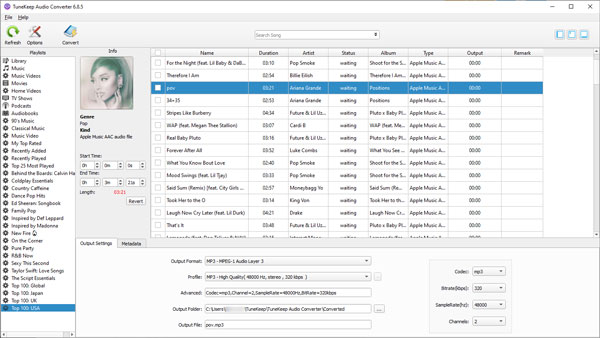 Choose a playlist on the left panel first, and tick a checkbox to choose a song. Once the song is selected, the converter will let you know its audio type including MP3, AAC (M4A), WAV or Apple Music AAC files. If you tick the checkbox at the top, all songs in the playlist will be selected. Built-in search box will be a good helper if you want to find some songs quickly by the name of song title, artist or album. 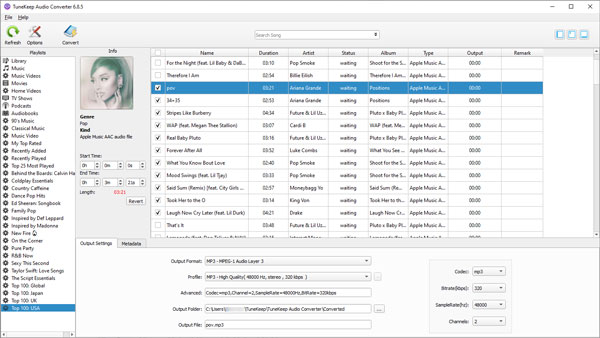 MP3, M4A, WAV, AIFF and some more output formats are available in output format list. MP3 is the default output format. Choose 320kbps from profile list, and you will be able to convert Apple Music songs or iTunes M4A songs to 320kbps MP3 losslessly.

Click the "Convert" button to start converting iTunes M4A songs or Apple Music songs to MP3 or selected format. After the conversion is complete, click the "Open Output File" button to open the output folder and locate the output files. 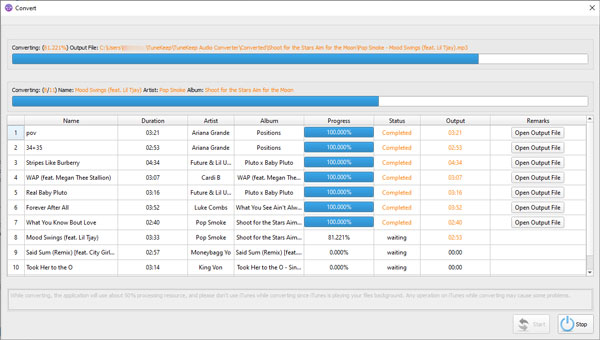