GarageBand is a music production application for beginners that can be used on macOS, iPhone and iPad. At first, there was only the Mac version, but since the processing power of iPad/iPhone CPU has increased significantly, the iOS version was finally released in 2011. Although GarageBand was designed for beginners, it is also used by many professional musicians and it is very popular. DTM (desktop music) has been realized by combining various sound sources. With a visually comprehensible user interface and a wealth of imagination and creativity, it's easy to make the best music.

GarageBand is included with the iMac, Mac mini, Mac Pro, MacBook Air, and MacBook Pro currently sold by Apple. For iPad and iPhone, you can download it from the Apple app store. There is no Windows version.

How to Add Local Audio Files to GarageBand

Launch GarageBand and you will be asked to choose a project. You can click "Open an existing project" or click "New Project" > "Empty Project" to create a new project.

You will be asked to choose a track type. The types of tracks provided are Software Instrument, Audio and Drummer. There is a detailed description of each track type. To add an audio file on your computer, select the microphone icon under the Audio type, select the input source and click the "Create" button at the bottom right. 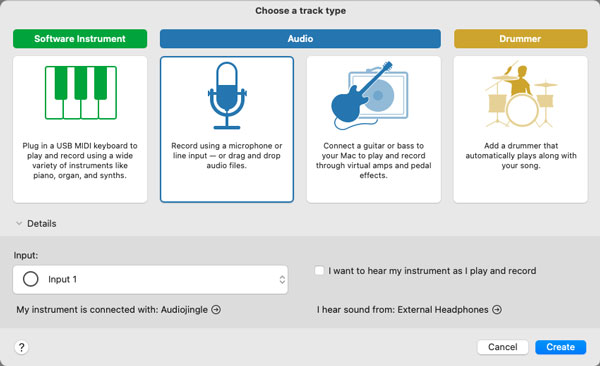 The new track appears in the track area. Drag and drop supported song formats such as MP3, M4A, AIFF and WAV on your Mac to edit them as GarageBand sound sources. After editing, the output file can be shared to Music app, SoundCloud, AirDrop, email, disk, etc. You can also sync your project to the iOS version of GarageBand. Click "Share" on the menu bar to display the sharing options.

Music formats that can be added to GarageBand are MP3, M4A, WAV, AIFF, etc. With TuneKeep Audio Converter, you can convert Apple Music songs to these formats with ID3 tags retained.

How to Convert Apple Music Songs to MP3, M4A, etc. and Import to GarageBand

TuneKeep Audio Converter is very easy to use. Check the steps below to learn how to convert Apple Music songs to GarageBand supported audio format in only a few clicks. 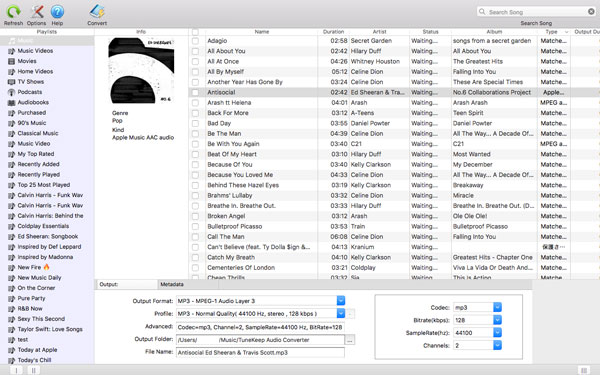 You can check the Apple Music songs in the displayed playlist and select your favorite ones. By ticking the top checkbox, you can select all the songs in the playlist. You can search for a song immediately by entering the song title, artist or album in the built-in search box.

If necessary, you can click Options to set output volume, how to sort and rename output files, etc.

Click the "Convert" button to start converting to the selected format. After the conversion is complete, click the "Explore output file" button to open the output folder and locate the output music files. 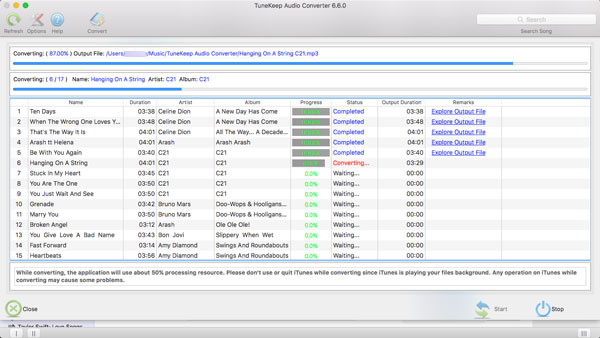 Later, you can refer to the method of adding local music to GarageBand introduced above, you can add MP3, M4A, WAV or AIFF files from the output folder to GarageBand as sound source by dragging and dropping them into the track area.

If you want to import your favorite Apple Music songs to GarageBand and try to make some new tracks, please do not hesitate to download the free trial version of TuneKeep Audio Converter and have a try.